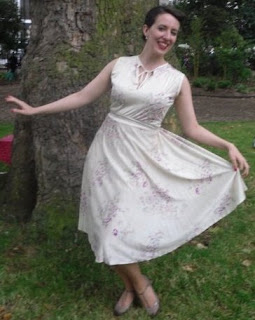 Burlesk was absolutely wonderful! I've only been to Hastings once before and this time I saw a very different side of it. Venue is tucked down the sweetest little lane of cute stores and relaxed drinking spots.

I arrived after making a mental note to take the train for a day trip along the coast one weekend. I didn't realise how easy it was to travel from Brighton to Hastings and beyond. It was my blessed luck to be doing a prop free act and one without a corset to boot, as it was ticking on past 7pm and the sweltering heat hadn't abated.

Domino and Severine run a burlesque taster class for beginners before the night begins so I tried to find the dressing room inconspicuously but it wasn't to be as a gent out the front had directed me to the first door on the left which led to the tiniest dressing room I've seen. Realising there was no way they could squeeze 10 girls in there I gave Honey Wilde a call. She laughed and explained they were up the back above the bar and gave me a little wave from the window.

This was more like it! Dumping my bag down on one of the chairs I proceeded to pull my costume out and make some last minute alterations of an extra clasp as it had been popping open during rehearsals.

While I stitched Honey and Khandie Kisses were getting made up as they were in the first act and before too long the two of them had me in stitches. Discussing false eyelashes, Khandie mentioned that she had so many in her bathroom cabinet she thought they might turn into one big eyelash and crawl around her apartment. Which wouldn't half make a bad short film!

Before we knew it the girls for the first act were hurried off to the backstage area and as the show rolled on I managed a peek at the acts while I attached pasties, covered myself in body shimmer, backcombed my hair and untangled my tassels (the ones on the dress not on my chest!).

Piratica did a brilliant debut performance to Diamonds Are a Girls Best Friend from Moulin Rouge and I'd seen Honey's 'How to Burlesque the British Way' at LBF and it was as hilarious as I remembered. I hadn't seen Khandie's Blitz Belle act, man that girl has energy! I loved the fact that she got down into the audience and all the more incredible considering she wasn't feeling very well. The sign of a true showgirl.

Unfortunately I missed Domino's first act as I was hurrying to do my final touches before interval.

Waiting backstage I couldn't help but feel a dose of nerves. I had created the Psycho GoGo act for a pulp press launch and we didn't end up using it, going with Na Touche Pas instead. So this was actually to be the first real performance of this act and I felt like a new performer all over again. It's been a very long time since I debuted an act.

I needn't have worried, it all went brilliantly. One of the girls said afterwards that she wished it had gone on longer which is nice!

Throwing on my new 60s shift that I bought last week in London I dashed out to catch Domino's act which was just fantastic, and Sev's inspiring finale on the Burlesque ban in Camden. I'd love to see a licensing officer go a few rounds with her, she'd have them under the point of her stiletto before you can say Burlesk!

After the show I popped upstairs to sort my things out. Due to the heat no-one had opened any of the wine so I uncorked a red and poured myself and one of the girls who'd been helping out (and a budding burlesque contortionist!!) a glass and went down for a mingle and a nose through the Equilibrium stall onstage.

I contemplating spending my earnings from the night on a pair of sailor shorts and then thought better of it but did have a lovely chat with the owner who's other half was an absolute gentleman and helped me down the stairs with my bag and put me in a cab to the station.

I settled in for an uneventful journey back to Brighton but it wasn't to be as three lads jumped on the train about halfway along. You can always tell if people are safe or not and they were harmless enough, although one was exceedingly drunk and very amusing. In any case, listening to his drunken tangents passed the time until I arrived in Brighton and jumped in the first cab home. There is something to be said for performing mid week and that is that no-one is lining up for the taxi's at the station.

Oh the bliss of flopping into bed, exhausted after a long day! Now who says I'm not rock'n'roll...

Bella de Jac is a performer for BABC
Posted by Burlesque Against Breast Cancer at 07:14