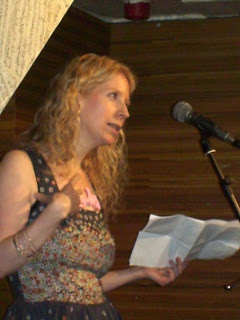 My name is Emily Breen. I'm a columnist for Essex magazine The Edge and contributor to movie site HeyUGuys.co.uk. I recently completed my first novel Trading Up and am working on the second. I live in Chelmsford and I am a regular at the Book Club Boutique. This is my recent contribution from the Burlesque Against Breast Cancer night there.

Boobs Have the Power

In the kingdom of the working flat, the breast is truly King

Boobs have the power to make grown men do stupid things

Like spend their cash pursuing them, eschewing wedding rings

(A client left the flat one day so lost in thoughts of chest that the following night he struck up a conversation with me in a bar... and then remembered where he had seen me before)


One guest star was an Essex girl - a record breaking bird

Boobs have the power to make a grown man speechless

Jaw agape, Medusa-stoned; some portions of their features


GFE required a C to conjure girl next door

Others rather pickier denied that less was more

The less bashful of the species often recommend a friend

("It was an F he said, but young and perky, no sag" Certainly Sir that pair is sitting right here, but there is a woman attached - would you like to hear her description?)


I really think the ladies of negotiable affection

Have much to teach us amateurs of cleavage misdirection

(We might not yet have mastered alchemy, but a good balconette will make even an A cup runneth over. Still, for some, anything that prefixes double-D is the magic number)


Boobs have the power to make a grown man cry

And if they try to claim they don't? My dears, the grown men lie

Boobs have the power to make them all confused

We have all the power... because we control the boobs

(When weilding a pair of your own do try to heed the words of the man in the red catsuit: With great power comes great responsibility!)

Boobs have such power. Be sure to use it wisely.
Picture taken by Rae Jenkin of Emily performing 'Boobs Have the Power' at the Breast Awareness night at the Book Club Boutique at Dicks Bar in Soho, on behalf of Macmillan Cancer Support.
Posted by Burlesque Against Breast Cancer at 03:41