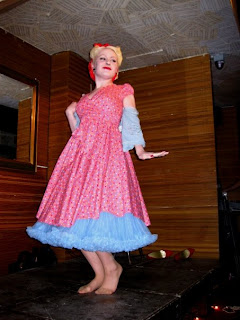 The 'post-finishing my degree' feeling of being at a bit of a loose end and not having much to do has thankfully been avoided so far, thanks to a nice busy few weeks with lots of fun shows in a variety of exciting locations (Well, the west country and Croydon, but still, lots of fun!) Only one of them has been in the usual central London type area, and that one was made special by being one of the events put on by the wonderful people who are the reason behind this blog, so it’s been a good month of burlesque adventures for me!

The end of June took me off to sunny Devon, Exeter to be specific, for Kinky and Quirky…

I was performing with my wonderful partner in double act related crime Lena Mae, and also the lovely Fleur Blanche. Points for wonderful looking after of the performers goes to the Bells, who run the night, for many reasons but in particular for providing me with a hay bale for my West Country act so I didn’t have to drag one all the way to Exeter with me. I do love my West Country act but if I’d really thought about how much effort dragging a large, heavy, awkward, shedding hay bale with me everywhere I performed it would be I might have re-thought the idea somewhat!

My secret burlesque ambition is to one day create an act the costume of which can be fitted into a shoulder bag, but I seem to be drawn to thinking up ideas that involve heavy scales/hay bales/A1 posters and easels etc. However, in this instance there was no need for hay bale dragging, which was most wonderful and being an act based around an appreciation of farming, The Wurzels, and excessive cider drinking, it went down very well to a Devon audience. So well, in fact, that my performance became somewhat over-enthusiastic with the end result that I chipped my tooth slightly on my bottle of cider - oh, the perils of burlesque!

Myself and Lena’s double act was it’s usual shambolic but highly entertaining self; I got stuck in my dress, Lena got stuck in her bra, I accidentally hit Lena so hard in the face that I injured her jaw, but other than all that it went very well and everyone seemed to enjoy it, so all’s well that ends well!

The following weekend took me down to Devon again, this time to Plymouth. I stayed in Cornwall with my parents for a few days for this one and I am very proud of myself for braving the perils of swimming in the icy waters of the English sea whilst there. Although if I am completely honest, the only thing that got me in the water was mentioning to a friend before hand that I was going to attempt it and not wanting to admit to being defeated by the cold.

But still, I am proud of my stubbornness if nothing else!

The shows in Plymouth were fun, not as easy a crowd as some as it wasn’t really the usual sort of burlesque audience, but I think it’s very good experience to perform in front of crowds that aren’t as easily appreciative as a crowd who are all specifically there to see burlesque and know what to expect, and it was lovely to meet Coco Deville who was also performing.

My next show after this was the Super Summer Breast Awareness Night at the Book Club Boutique, for Burlesque Against Breast Cancer. I thought this was such a great night. Everyone there and the general atmosphere was lovely. I really enjoyed the fact that the night managed to very much stay on the topic of what we were raising money for, but in a very positive way.

Everyone who spoke, read, played or burlesqued on the night was brilliant so it’s very hard to pick out highlights, but it was great to see Kiki Kaboom’s chav act as I had wanted to see it for absolutely ages and it did not disappoint, one of the funniest acts I’ve seen.

Enjoyable for the opposite reason (in that I had not previously heard them and wasn’t expecting them, was Lola and the Clic; beautiful music with sweet and funny lyrics, really good.

The following weekend took me down to my hometown of Bath for Geisha Go Disco’s Fight Fire With Fire Night. Unfortunately we had to battle with the venue being quite far up a long road on a night when it was absolutely pouring with rain, so the night wasn’t as packed as it deserved to be, but it was still a really nice night and really well organised by Gem. I love doing gigs down in Bath anyway because my parents are generally happy to drive me to and from the venue.

Yay for not having to negotiate buses whilst carrying giant suitcases and easels and all the awkward to carry objects I love to fill my acts with!

After far too little sleep it was off to the magical land of Croydon for Dj Suave’s night the Glitter Room. As per usual with Keith’s nights it was really enjoyable, very well organised and made even better by the providing of a backstage table of crisps and lollipops and triangular sandwiches!

At risk of sounding overly obsessed with lollipops and sandwiches, I must admit that free supplies of them backstage make me extremely happy, particularly later in the night when one is done performing and has had a glass or two of wine and sandwiches that have become slightly stale by this point suddenly become incredibly appealing. After the slightly tipsy hurrah for sandwiches incident, it was off on the train back to London for a very long sleep to recover from a busy weekend of Burlesque adventures.

So yes, that pretty much sums up my recent burlesque related exploits, lots of wonderful times had and lovely people met, and hopefully there will be lots more fun this month for me to write about!
Posted by Burlesque Against Breast Cancer at 01:09