When BABC came to Brixton 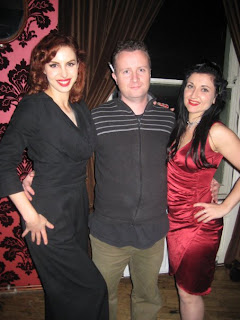 One of the great things about taking BABC out on the road has been the sheer enthusiasm and support from the burlesquers who have dedicated their time and effort to raising money for Macmillan. This was no more than evident than when we brought BABC to Brixton last October.

I contacted Sharon Kay on Facebook in the hope that she would come and perform for us and knowing that she ran a great series of instructional tutorials and lessons in performance, she would know one or two people that would step up and twirl for charidee.

I took a punt and trusted her judgment that it would only take a show from one other person she had in mind to put on a great show. Initially, I was skeptical. I'd put on at least three or four other ladies on at other shows. But I needn't have worried. As we pitched up at the boutique pub, pushing through the colourful and dubious folk in Brixton market, I was greeted with a much smaller venue than I expected and started to get very nervous indeed. Myself and my partner started to fool around with the DJ equipment, wondering how it worked and soon enough we were joined by Sharon, who performs as Indiana Belle, who came with the stunning and beautiful Annette Bette Kellow. 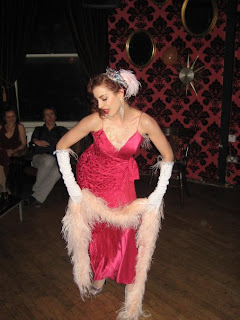 Annette had recently won the Best Newcomer title at the London Burlesque Festival and was part of Sharon's stable of lovelies and immediately, I realised what Sharon said was true. She really did completely embody the world of glamour and burlesque. Even before the performance kicked off, she perched on a stool and sucked on a straw seductively as she told me about her life. She was wearing a gorgeous red satin dress and beamed a glowing smile, as well as narrowing her gorgeous eyes in the most coy way. I looked down her gorgeous long stockinged legs and her vintage, velvet pumps and a pang of eternal love rushed through me. 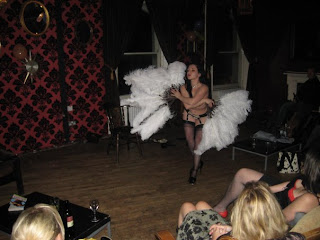 What they went on to do was show a textbook display of traditional burlesque dance that would rival the greatest earners in Vegas. Annette took on major stool and stocking tease as she peeled out of her sleek layers, while Indiana gave us an expert fan routine, complete with a very fabulous hat and cane display. 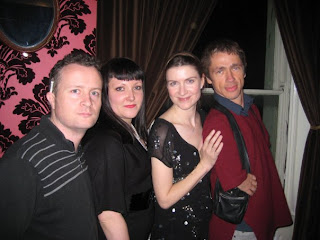 If that wasn't enough, the small intrigued crowd at The Dogstar were also treated to renditions of their stories, including the very mysterious Wanda Von Mittens, myself and my 19th Century tale of saloon whores and the brilliant and rousing actor, mat Fraser with quite possibly the best written story in 'Ultimate Burlesque', set in a club in New York called The Slipper Room.

But possibly the best part of the night was when Chris Manby rose to her feet, spoke passionately about her cousin Claire dying of breast cancer at the age of 35. She treated us from a reading from an old Stephanie Ash novel she wrote for X-Libris, something that I was quite excited about for a start.

It was a great night and despite low crowd numbers, people in attendance were both impressed and full of enthusiam for what we were doing for Macmillan.

Sharon Kay runs the venture Burlesque Baby.
Annette Bette Kellow is currently working on the film, A 1940s fable.
Posted by Burlesque Against Breast Cancer at 08:29