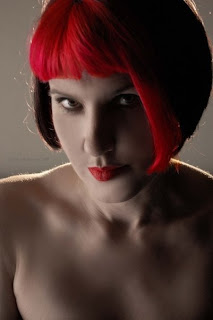 I reply to a shout out from the delectable Wet Spot proprietor and burlesque performer Ryvita Von Cheese on MySpace. She’s looking for local burlesque performers to work with actress Kitty McGeever (who plays Lizzy Lakely on ITV's Emmerdale) on her upcoming charity stage show at The Carriageworks Theatre Leeds for Macmillan Cancer Care.

‘Hey Ms Cheese, are you looking for nubile young lovelies for this show or will clapped out old mums do?’

I’m in and it gets better! Calender local news want to film some of the rehearsals at the now dearly departed Yorkshire Television Studios.

We meet RADA trained actress Kitty McGeever at YTV a few days later. Kitty explains some of her ideas for her show ‘Luvvie’s Blind’ while her friendly guide dog snuffles around the table looking for cream cakes to pinch. Oh yes, I neglected to mention Kitty is also completely blind – the show is a humorous take on Kitty’s own experiences of blindness including sketches and songs. The proceeds from the show are to go to Macmillan after Kitty helped to support her sister, script writer Caroline Mitchell with her own battle with breast cancer.

We (that’s me, ‘Vita, Ruby Buttons and Bam Bam Blue from The Boneshakers and Lexi Sexx and Lily Von Lush from rival Leeds burlesque troupe The Dagger Dames) rush off to change into our assorted corsets/bras/stockings and suspenders. We are filmed shimmying about a bit behind Kitty as she wows the cameraman dancing with her white stick in a most unusual manner to the strains of ‘Hey Big Spender.’

The six of us appear on Calender’s teatime edition the following evening after Kitty’s studio interview. My dad phones to congratulate me on my five seconds of fame. He must have been so proud seeing his half-naked daughter jiggling away on telly whilst eating his shepherd’s pie.

Rehearsals for the show continue on a weekly basis and Ryvita and I somehow find ourselves in a short comedy burlesque routine that we choreograph between the three of us. Kitty dancing with her white cane, ‘Vita and I with our top hats and canes. We practice a lot. None of us are us are used to performing in a troupe and when one of your troupe members is completely blind you’d better get your timing spot on.

Over the coming weeks I’m lucky enough to meet some fantastic people and watch them at work. Unsurprisingly ‘Luvvie’s Blind’ is a resounding success. Our small segment goes without a hitch and we’re relieved that we did a good job for Kitty and our pasties didn’t fly off in front of half of the cast of Emmerdale who are in the audience. From the wings we hear the roar of applause that greets the finale and I notice Kitty’s sister Caroline shed a tear and go off to compose herself behind the scenes. It had been a long journey for Kitty and Caroline and one that Macmillan had helped to make possible.

Jubilee Swoon is a resident of West Yorkshire and has been performing burlesque for over a year at events all over the U.K including The Slippery Belle, The Wet Spot and The London Burlesque Festival where she won the Best U.K Solo Newcomer category at the Battle Royale. You can see more about her on her Myspace. 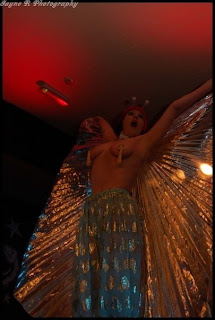 Posted by Burlesque Against Breast Cancer at 05:57