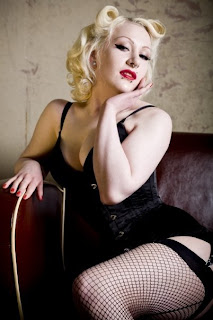 I thought first I should do an initial blog to introduce myself a bit and also, as I’m quite a new performer and I thought it might interest people thinking about getting into it, I’d write a blog about how I got into burlesque and the experience of my first performance last August!

Like quite a lot of performers, I come from a background of doing a lot of dancing. I’ve done ballet, tap, jazz, contemporary, Arabic, Irish and ballroom to name a few!

One of the main reasons behind my desire to get into burlesque was that I absolutely loved dancing and performing, but I’m not really physically cut out to become a classical dancer, so I love being able to perform a form of dance where one can play to one’s own strengths. Especially the choosing whatever style and blend of dance, humour, acting etc one wants!

I also love anything creative and fashion related, so planning costumes, choreographing routines etc is so much fun, although I rather fear I’m going to discover my uni grades have gone downhill since I started performing, as pretty much all my spare time seems to go into burlesque related activities these days!

I think I was sixteen or seventeen when I saw my first burlesque show in Bristol and I’ve wanted to do it ever since then, but didn’t get round to it as moving from Bath to London and starting uni etc, somehow got in the way and it got rather put to the back of my mind as one of those ‘one day I’ll do that’ type of things.

However, during my second year at uni, it finally started turning into more of a ‘one day soon I’ll do that’ type of thing and I booked myself on Jo King’s course (which was brilliant) and really changed my views on what sort of performance I wanted to do. Originally, I was quite interested in the more classic side of burlesque, but Jo’s course really opened my eyes as to the fun of doing more comedy based routines and having routines with a plot, gimmicks etc.

Although one can obviously teach oneself the technical basics of burlesque like tassel twirling etc, I’d really recommend going on a course as it really helped me learn how to develop a routine and I think I would be quite a different (and very likely, worse) performer if I hadn’t learnt from Jo King. Plus Gypsy Charms at The Ministry of Burlesque, who I take improvers classes with now.

My first show was in August last year, at a night my friend Tom was putting on in Bath. He mentioned on a night out that they wanted burlesque performers for the night and I rashly asked if I could do it!

This seemed like a great idea until the reality of what I had said I would do hit and I realised I really didn’t have that long to think up a routine, let alone find the right music, plan/make/buy the costume and do the choreography.

The routine I performed is still the one I do most often and I still love doing it, but creating a routine for the first time involved so much more work than I would initially have imagined. My main memory of this time was naively assuming finding a 1950s song, of the right length and speed to dance to, which lyrics suitable to a routine about weight loss would be relatively easy.

No, no it really wasn’t!

In fact, I think I have pretty much an entire shelf of obscure 1950s music now from my struggle to find that song.

However, eventually I came across ‘Plenty of Love and 20 Calories’ by Jayne Mansfield, which was perfect!

Costume was another thing which I assumed would be easier than it was. Anyone who’s ever been shopping with a mental image of a certain type of dress or top in their mind will know what it’s like, nothing is ever quite what you imagined.

It only took a few days of frantically searching the internet for me to realise that I was going to have to make it myself. Thankfully however, my wonderful mother (who is an awful lot better at sewing than me) helped me out at this point and saved me from the horror of what would have been the results of me trying to make it myself.

On the subject, I would say to anyone thinking of getting into burlesque, learn to sew, it’ll make your life a lot easier!

Choreography I found the easiest aspect of putting it all together, but I’m so glad I filmed it a lot before I ever performed it. More than once I thought I’d come up with an absolutely awesome bit of choreography only to discover that nothing could be further from the truth. But yes, so now I had my routine all put together with costume and music and props and everything, so onto my first performing experience. I can say pretty safely, probably the most nervous I have ever been in my entire life.

I pretty much didn’t eat all day I was so nervous, but then worried that might make me faint, so ate chocolate to up my blood sugar and then just ended up feeling faintly sick. Well done me. I have a very clear memory of standing by the side of the stage before I went on thinking to myself,

‘Why am I doing this?!’, but once I actually got on stage I really needn’t have worried. I had so much fun and the bouncy adrenaline filled feeling of being on stage more than made up for the 'oh dear god what am I doing moment' beforehand. I’m always so happy and energetic after a show, which generally lasts a lot longer than the terrified feeling beforehand, thankfully...

The routine all went pretty smoothly other than my bra almost getting stuck, but thankfully, this was an opportunity for me to learn the fact that little costume problems and mistakes are generally a much, much bigger deal to you than they are to the audience. Most of my ‘oh my god, was the bit with the bra really noticeable?’ type comments were met with the response that people didn’t even know which bit I meant, so whilst I think it’s always important to try and learn from messing up on stage, one can take comfort in the fact that, as a general rule, the audience is not going to notice tiny things like that if the routine is generally entertaining, and there’s no point in beating yourself up over it.

So yes, that’s pretty much a summary of how I first got into burlesque. I’m so happy I got up the courage to do it as I’ve had so many amazing experiences both onstage and offstage in the last ten months, performing at some brilliant events and meeting some really lovely people. Fingers crossed there are many more amazing things to come... 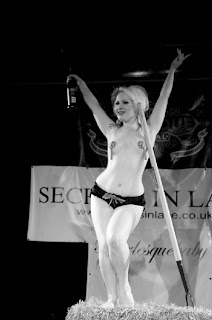