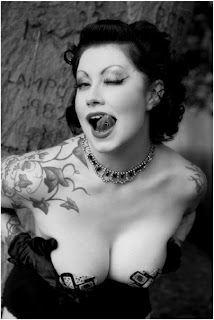 My name is Mary Lynch. By day I work as an IT security engineer and on weekends I am a burlesque performer and events organiser. About 15 years ago, my mum was diagnosed with bowel cancer.

At first it didnt really register with me. I was reasonably young, had led a sheltered life up till then. I was not particularly close to either of my parents and my mum was the hardest woman I knew.

She was invincible. She had me late on in life (at 42 years old) and gone straight back to work months later. She worked in the catering industry as a manager and took no shit from anyone. She was physically stronger than most men I knew and mentally stronger than anyone else. So it was odd seeing her weak and sick.

It was quite confusing as she became someone else, she was no longer my mum. She was a sick, complaining old woman. I hated it and sadly did not show her the love and support I should have done.

She went into hospital to have that part of the bowel removed, my dad went to pieces as he was used to her looking after him and I was the same, except I showed no emotion at all on the matter, I didnt know how to - a trait I got from my mum who never showed any kind of emotion as she viewed it as a sign of weakness.

The operation was successful, the doctors believed they had removed all the cancer. They kept her in for a few days, then let her come home. She was in a LOT of pain, but refused to take pain killers. She was given a diet sheet as there was certain foods she was no longer allowed to eat and there were some foods deemed as being good for cancer and for keeping it at bay.

She was given medication to take which she hated doing, as she didnt believe in being weak enough to need medication. It took her a while to get back to herself and get back on her feet - she was told to rest for at least 1 month, within 2 weeks she was back going on day trips with me to Brighton on weekends - slowly tottering along, but she needed to do it, she felt she was letting herself down more than anything by not 'beating' what had happened to her.

She was meant to stay off work for at least 4-6 months, however she was back at the hotel working within 2 months, cycling the 10 miles to work at 5am every morning.

A few years later, she had another relapse and had to go back for a second operation - at 65 years old they were not hopeful for her as more bowel was being removed. But as I said ,she was a hard lady and nothing had ever beat her before, so she once again pulled through. But this second operation really took its toll. She had to retire from work - which really pissed her off and she had start taking things easier. She was weak and shakey for longer.

She had now become a carer for my dad who was slowly becoming crippled by arthritis, so she was stuck in the house with a husband who had to be waited on hand and foot - which has only got worse over the years.

Every 6 months she went for her check-ups - most of the time on her own as I was not always able to get time off work - I cannot even begin to imagine how this must have made her feel. Because she was always so emotionless and hard I never even considered she may have had feelings on the matter and the fact she had to be intruded every 6 months to make sure 'The Cancer' had not come back. All was good though, after 3 years, her check-ups were dropped to every year.

It is odd how neither her nor I cried about any of it, yet my dad bawled like a 3 year old every day over it all for years and he was petrified that she would relapse. I think mother wanted to block out what was going on to help her get on with life and work, rather than dwelling on it and perhaps I was doing something similar or maybe I am just that heartless - I really dont know.

Mother and I now holiday with each other twice a year, I go out with her every other Saturday and we go for regular weekends away - making the most of time. She comes to all my events that I dance at and often helps me organise them as well.

But of recent, she has started to have bad stomach pains and difficulty keeping food down. She says she feels the same as she did when she was first ill. Her GP does not know what is wrong with her, so has set up an appointment with the cancer specialist at the local hospital. Mother is just waiting for a date to come through and the medicine she has to take for 48 hours before the examination.

She is very anxious - at 72 another operation is unlikely - so we are just hoping that it is a stomach bug or her ulcers playing up. But we will have to wait and see.
I think if she is ill again, we might both finally show some emotion on the situation. The doctors and nurses have always been great and helpful and we are really grateful to them all for doing such amazing and difficult jobs. My mum always donates to Cancer charities and I have taken part in fundraising thruogh burlesque events for cancer research and will always continue to support them when I can in their amazing work. 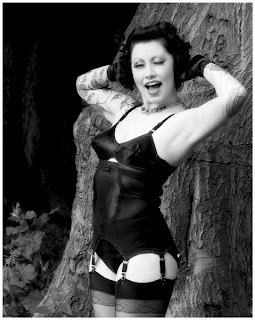 Pussy Velour is a burlesque performer and runs the Velour Palace in Gloucester, who do themed monthly events of a very decadent and elegant manner. She's also the face of Red Rabbit Books.

Posted by Burlesque Against Breast Cancer at 11:37