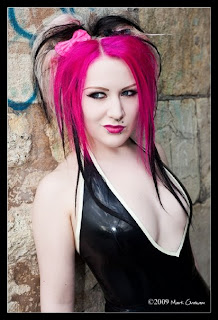 Just in case I wasn’t busy enough with performing about six times this month and trying to sort out my post-university career, I also decided now would be excellent timing to sort out two new routines. I am so full of good and entirely practical ideas! Still, new routines are always fun to create, for the joy of being able to spend all your money on expensive sparkly underwear and soothe your financial conscience with the excuse that it’s for ‘work’ if nothing else….

I got my first ever pair of fans as a present from my parents for finishing my degree and used them for a seaside themed fan dance over the summer, but I decided with November rapidly approaching the likelihood of being booked for a nautical or seaside themed night is rapidly dwindling, so I’m busy reworking things for a slightly darker more winter-appropriate number.

This is really the first time I’ve done a ‘serious’ routine as I’m generally all about the ridiculous plotlines, props etc and I must say it’s given me a lot more respect for performers who do more serious acts. I’ve always thought that creating funny routines was a lot more of a challenge than just ‘being glamorous and taking your clothes off’, but working on my fan dance has altered my views on the matter somewhat! Not being able to rely on keeping people amused via the medium of comedy moustache disguises and pole dancing on hay bales makes keeping things entertaining and ensuring people don’t fall asleep half way through is quite the challenge.

I’m having to ensure I put a lot of effort into costume and choreography to make sure it’s still interesting to watch. On the plus side, I did kinda use the whole having to make sure the costume was interesting thing as an excuse to buy myself some lace print Atsuko Kudo latex I’ve been wanting for years, so that was something of a silver lining to the unforeseen challenges!

I’m also working on a new double act with the lovely Lena Mae which will see me firmly back in comedy territory. Working on double acts is awesome fun and I’m super excited to see how this one turns out, although also a little nervous, as due to the fact that Lena and I currently live a good couple of hours on the train away from each other we only have two full days to get the choreography sorted. Fingers crossed all will run smoothly!

Having said that, me and Lena’s double act performances have something of a history of being a bit of a shambles (injuries from hitting each other in the face, getting stuck in bras, the list goes on), yet always being a lot of fun and going down well, so I’m sure this one will be fine on the night!

I probably shouldn’t tempt fate by saying that, but still, it’s good to be optimistic…

Other than working on my new acts I haven’t been up to an awful lot burlesque related since I last wrote, however last Saturday I was in London for the afternoon to perform for ‘Naughty Sorts presents 1 in 4’, a charity event raising money for Mind. It was a great event and I was really happy to be a part of it, but unfortunately I was struck down by an evil cold of doom two days before the show, and spent most of the time before I went on feeling very sorry for myself and panicking that I was going to sneeze all over the audience. Stripping with a bright red nose and a hideous cold isn’t exactly the sexiest look, but thanks to a combination of an awful lot of makeup and some good old cold fighting on stage adrenaline I managed to battle through without looking too much like death, I think.

Later this month I’ll be hitting the stage in Bath for Club Cadaver on the 22nd and Ministry of Burlesque’s High Tease on the 30th, and debuting my new double act in Hitchin on the 25th, followed by burlesque style Halloween spookiness on Shoreditch on the 31st. After these I’ll be having a nice rested relatively burlesque free November getting my Christmas act ready for December’s shows, so come see me soon!

Miss Dolly Rose is a rising star in the UK burlesque scene. She has performed for BABC in the past and she can be found at www.myspace.com/missdollyrose 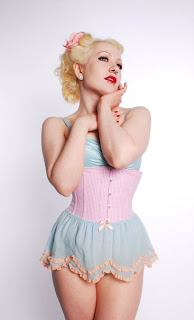 Posted by Burlesque Against Breast Cancer at 05:52