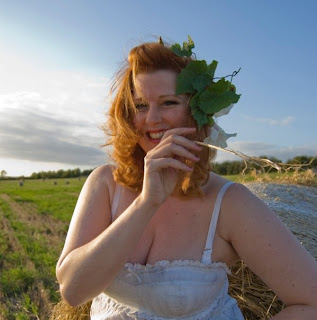 I was 15 and living in a small town for a while. I was rebelling against something, not quite sure what and needed money to get to Brighton's bright lights and party as much as I possibly could.

Nothing else mattered. Babysitting jobs took up too many evenings and there were no other jobs going in this limited town. A fellow rebellious schoolmate, a punk called Susan, got a part-time job in a local nursing home. She said there was a cleaning job going. That'll do me, I thought. Even though I couldn't stand old people, they were alien to me. They stank of moth balls and lavender and had no teeth and moaned all the time. Never mind, I thought. My job won't be 'involved' with them, I'm just going there to clean...

The nursing home was a large old detached converted house with a little drive up to the main entrance with hedges and trees along the front wall. On my first day I was told to go around the back and never to use the front door again. It didn't have a doorbell anyway because it might 'disturb' the residents. On entering through the back door, I found myself having to walk through the residents dining area, where the first thing that hit me was the smell. An overpowering stench of decaying humans and the weak watery boiled food that was being served to them. Then I noticed heavy drawn curtains, all windows were shut. There was a dark damp ominous feel to the room, even though it was a beautiful warm spring day outside. The residents looked pale, like ghosts with expressions showing they'd lost the will to live a long time ago...

Suddenly, a woman, the Matron who owned and ran this 'House of Fun' appeared! She had steel blue eyes and the most piercing stare I have ever seen. She must have been in her late 60's, thin with sharp features and very long silver hair swept up into a bun. She was from a different era and there seemed something...dare I say it ..Nazi about her.

She thrust a dirty old dustpan and brush into my hands and told me to clean the carpets throughout the house. I asked her where the hoover was, she looked at me like I had just shot someone,

"We do NOT have a hoover or any machinery in this house, the noise disturbs the residents!"

After a good 2 hrs on my knees and another 2hrs wiping old furniture with a damp old ripped up tea towel from the 1970s (she didn't believe in cleaning products), my back and my knees were killing me and I felt quite sick from the dust and the stagnant air. This little cash in hand job wasn't going to be as simple as I thought.

As the weeks wore on, I began to despise this woman. I was only 15 and I didn't really know what a sadist was, until now. One day, I was on my knees dustpan and brushing one of the bedrooms. All of the bedrooms had men and women sharing with no privacy. Right in the middle of the room was a woman crying. She was naked from the waist down sat on a commode,

I stood up to help her, then the Matron apeared and shouted,

"Leave her THERE! She HAS to learn!"

"Help, help..." coming from that room. I peeked in and sure enough she was still sat there on the commode....

Alice, the one with severe dementia, would wander around in her nightie whimpering and cuddling a little rag doll close to her face like a scared child. She wandered into the kitchen one time when two fed-up auxillery nurses were propped up against the sink, arms crossed, sharing a fag. One of them said,

"We need to wash that doll"

They prized her fingers away from the doll and when her grasp slipped she screamed and screamed. They cracked up laughing, threw it on the floor and said,

Now, when I took the mickey out of old people it was harmless. A generational thing. Just as one or two would take the rise out of my clothes, hairstyle, music etc. But this was something else! I did tell people about it but I'm sure they thought I was making it up. Well, I was a bit hormonal at the time and hardly ever at home, living a life of escapism.

Another character in the 'House of Fun' was The Major. He was quick off the draw, funny as hell and a randy old bugger! I would try to avoid dust pan and brushing with my bottom facing any door because he would come creeping in and 'THWACK!'

He would skip off laughing and I would be left with a smarting buttock, as well as what was now turning into the common victorian condition 'housemaids knee'.

My favourite resident was a lady called April. The reason why all the doors and windows were locked shut at all times was because of this minx. She constantly tried to escape and to be quite honest with you, I couldn't blame her. Now and again, day and night, a distant rattling could be heard. Well, that was April trying all the doors and the windows. Sometimes, she would put her coat on over her nightie and tell you she had to go and meet her husband. She would say (whilst pulling at a locked door to no avail)

"I have to meet my husband now. I'm late, he's waiting. Unlock the door please..."

Her husband died 20 yrs before. My loathing for old people was diminishing.
One day, the home was short staffed so we were all roped in to help serve lunch, which was some grey slush with a pink watery liquid running through it. Someone had burnt something in the kitchen, so for once they had to open a window. This was ground floor, front facing. I was told to go back and lock the kitchen window. When I walked in, there was April, trying to climb out but just too old and frail to succeed.

Something clicked inside my head. This suddenly felt like 'The Great Escape' or 'Papillion' or 'One Flew Over the Cuckoo's Nest', when a treasured moment of freedom is better than no freedom at all. I said,

"Do you need to see your husband, April?"

So, I lifted her gently out of the window and placed her on the front entrance outside. I was a big strong girl, so it didn't take much physical effort. I heard myself saying,

As she shuffled off slowly down the drive, I saw her doing tiny baby steps in her nightie. I then locked the window and returned to the dining area. I felt exhilarated and I knew for sure (wherever distant land she would visit), she did too.

An hour later, she was found at the corner of the road sat on a wall admiring a garden. The next day, back inside, she quietly whispered to me,

"Thank you..." as she toddled off to go and try all the doors and the windows yet again. I left soon after, well walked out in fact after telling the Matron,

"Stick your dustpan and brush where the sun doesn't shine, you old cow!!"

A while later, I discovered that before I'd worked there, the home had been on a BBC complaints programme. There had been many bad reports about the place. The matron had defiantly carried on running it for a few years until she died there. Finally it closed. About bloody time too!

Strange how that job gave me a lesson in life, where my lifes adventures were just beginning.....

Honour Mission is a Brighton based burlesque performer and will be performing for BABC at The Ocean Rooms in Brighton on October 16th. Honour lives at: http://www.myspace.com/honourmission

Photo by Stan Keetley
Posted by Burlesque Against Breast Cancer at 07:42