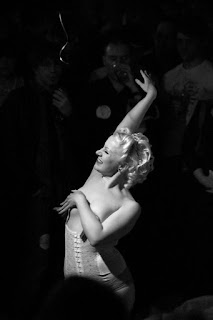 Due to my current enforced living in the west country situation, and my reluctance to miss out on London burlesque based fun due to this, the last month or so has seen me on an awful lot of trains. On the plus side, I have made the discovery that the hot chocolate they sell on First Great Western Trains is actually quite nice?! The coffee not so much.

It has also seen me taking advantage of the loveliness of my friends floors/sofas/spare beds…special thankyou's must go to the lovely Duchess Divine for putting me up for three nights after I cleverly booked myself for four shows in the space of a weekend without thinking about the ‘I don’t actually live in London’ side of things. Whilst staying with Duchess, we were both booked to perform at her friend’s stag do on the Friday night. I wasn’t really sure what to expect having never performed at a stag do before and not really ever had any previous plans to end up doing so, but it was actually really fun and something I’d definitely do again if I knew the people involved, really nice atmosphere and we were well looked after! 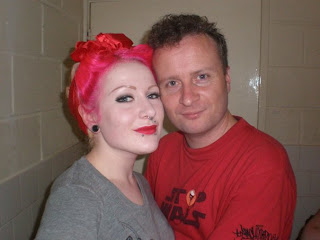 After a lovely time despite the delayed dressing room entry and my subsequent frantic attempts to get into my costume in 15 minutes (apologies to anyone I stressed at!), I was off to Shoreditch to perform at the gorgeous Emerald Fontaine’s night at The Fox, where lots of fun and some excellent cupcakes were had. The night was vintage English summer themed, and I was most impressed by the Astroturf croquet lawn in the smoking area!

And after such a busy weekend, it was off back to the West Country for what was intended to be a quiet night of sleep and rest, but somehow turned into me going out and drinking slightly too much cider (these things do happen in Somerset), before venturing back to London for Flay & Deville’s Circus of Marvels on the Monday, which was a really great night with wonderful performers, I highly recommend it!

Last Wednesday saw me up in London yet again for ‘Beyond the Cabaret’ at the Tiger’s Rear. One of my friends has just moved up to London from Bath, so I dragged him along (and may maybe possibly have specifically asked the night’s host Kiki Kaboom to pick on him…sorry Callum, but it was too tempting!). I did my West Country act which is always fun times, although I must apologise to all the other performers for the tendency my hay has to get absolutely everywhere.

I’m imagining a lot of people will be finding mystery hay lurking in their costumes over the next week or two! All of the performers at Beyond the Cabaret were absolutely brilliant, but special mention must go to Frisky and Mannish for covering Wuthering Heights in the style of Kate Nash, something I can’t say I ever thought I would see, but which I’m very glad I did!

This week, I’ve been having a nice quiet rest after all my London adventures, but I’m back up again this Thursday for the British Burlesque Invasion show, and the following Saturday for Duchess’s ‘1 in 4’ night which will be raising awareness of mental health in aid of the charity ‘Mind’, plus a few exciting shows down in Bath later in the month, so hopefully I’ll have a lot more to write about soon!

Miss Dolly Rose is a rising star in the UK burlesque scene. She has performed for BABC in the past and she can be found at www.myspace.com/missdollyrose
Posted by Burlesque Against Breast Cancer at 07:33