A Little Midnight Magic Part One 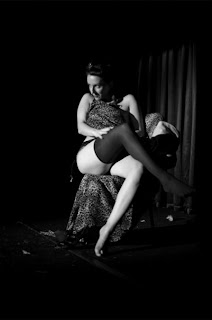 After Club Smooch, I was itching to get back on the stage. Particularly after seeing so many good friends. I told you Danny was there but did I mention Chrissie of Curve Couture was in the audience? She shot backstage to wish us all luck or break a leg and I'm amazed she managed it up the stairs in her gorgeously high red sparkly shoes! I'm always surprised by how many neck-breakingly steep stairs are in most backstage areas. I suppose it adds to the thrill! I was pleased that she got to see her Curve Couture masterpiece onstage.

So Thursday night, I was back in Hastings for Burlesk! Cabaret Carnivale. I had such a great time last time I was there I was so pleased to be back. Hastings is only just up the coast from Brighton and a very cruisy train journey had me there in no time. As I've perfected the art of 'On train make-up application' I only had my hair and a bit of glittering to do when I got there.

Ah yes, it's a glamorous life. I can even put on false eyelashes on the train. I'm not quite sure what my fellow train goers think of me, but I've long since stopped caring if it saves me a half hour at home!

Lady Severine who runs the night was the spectacular ring master for the night, resplendent in her top hat and hands down the best chest in burlesque. We actually had a bit of time for a chat over a glass of wine and the curling tongs which was nice for a change from frantic preparations. Most excitingly it looks like I'll be back for their Christmas show as well!

Miss Glory Pearl was on in the first half, which I was excited about as we really hadn't seen each other since the London Burlesque festival. She performed her Sally Poles routine which I managed to catch from the window in the dressing room while getting dressed. I was concerned that I was going to either burn my hair or knock over the spotlight which was set up in the window so I only caught a few pole tricks, but it was looking pretty good to me!

On in the second half was Honour Mission, another Brighton lass who also happened to be at the Club Smooch show with me the week before. She was on right before me doing her stompingly good 50 foot woman act, so I didn't see her act but I could hear it just fine. Those buildings don't stand a chance! Honour Mission, if you haven't had the pleasure of meeting her, is the very definition of an Amazon. Quite a woman.

After catching the end of Domino's act (fabulous as usual) and having a brief chat with the other performers we had to dash, but not before I had a chance to speak with Sinan Bozkurt. Sin has done most of the pictures from Burlesk! that I have on my website and excepting that he's also a very sweet man. I had just enough time to discuss a possible photo shoot and to take a few pictures after the show.

Gosh, how lucky was I to get a lift home with Honour! To be delivered to my door is a very rare luxury which I enjoyed immensely as we laughed all the way home, Honour, myself and her 'roadie' her very kind friend who was doing the driving. We spoke about Honour’s post here. I won't go into it now except to say that after sharing some stories with Honour I will be writing a special blog about my family's brush with Cancer. I believe Honour has bravely done so as well and after hearing her story in the car on the way home it made me think how many incredible stories must be out there.

Bella De Jac will be performing at the Ocean Rooms in Brighton for BABC on the 16th October. For more, go to: www.belladejac.com
Posted by Burlesque Against Breast Cancer at 15:05