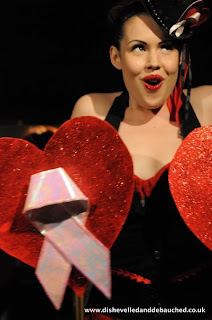 Well I have had the craziest few months, from being and unemployed to having 2 fantastic jobs.

I had a little break in Oct/Nov form the Burlesque stuff to start a new office job - something's gotta pay the bills you know! And I started training at Simon Drake's ~ House of Magic.......as Magicians Assistant.

OMG.....It has always been a secret dream of mine so I have been on cloud nine, although its been quite demanding working full time and preparing for the magic shows I have enjoyed every minute of it.

And I had my first show on Friday 4th December which was amazing I feel so honoured to work for such an amazing Magician and with the most professional and wonderful team at the HoM.

We have Public shows their on the 10th, 16th & 17th December if you would like to see the best magic show in London!

I have had 2 Amazing shoots with the legend Terry Mendoza at The Retro Photo Studio the first produced some beautiful Cheese Cake images for my personal promotion and the second was for the Rock-Billy clothing company ~ Collectif for their 2010 Calendar where I will be Miss March and 50% Miss June with the stunning Abby Bambilabomba Shields.

I am just getting the final airbrushed copies coming through of my first shoot now as Terry has been so busy so I will post them as I get them. I had such great results I will be going back for another shoot in 2010.

My next public Burlesque show is on the 19th December at The Christmas Carnival @ Bar Form in Enfield Town, its free entry and there will be lots of fun festive things happening over the weekend there. I will be performing my Santa Baby act at around 8.30pm so get down early.

I have also been preparing my act for Roxy Rendezvous 'Alice in Wonderland' event that's in Southampton in February, I playing the Caterpillar with a spectacular transformation...not to be missed. Tickets can only be purchased from Roxy direct. To book your tickets, email: roxytwirls@yahoo.co.uk or telephone 07815 967791.

Well I think that's it, other than a massive thank you to all my close friends & James who have been so supportive and encouraging and have help me out in lots of different ways I owe ya big time and I love you all to bits!

Beulah Bell has been one of BABC's most enthusiastic and dedicated performers. She first performed for us in Soho when we took over the Book Club Boutique at our Spring Fling, where she adapted her act with a special tribute to breast cancer awareness. For more info, visit: www.myspace.com/missbeulahbell
Posted by Burlesque Against Breast Cancer at 13:08