The Bunny is Back! 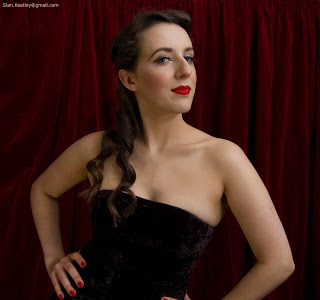 Ok, I realise I have been a little quiet as of late but that's only because I've been hard at work creating my first true comedy act.


I always have a couple of pages of act ideas at all times and picking ones I want to work on is so hard because I want to do them all! But I must stick by my own mantra of less acts, better quality.

Last time I was in town before a Club Smooch after my sound check and run through I popped out to pick up some false eyelashes. It just so happened that the local costume shop was having a sale of it's ex rental costumes. I wasn't expecting to find anything but I had a bit of a snoop amongst the rails and found a scraggy looking bunny costume.

I've always wanted to go to Halloween dressed in a big fluffy bear outfit, if only so I could run up to people and cuddle them like an overgrown teddy bear. So I was drawn to the bedraggled looking bunny. I managed to talk them down from the overambitious pricing and left the store with a new act in the bag. Well not quite, but you get the picture.

Music was the next stumbling block. I knew I wanted to use Run Rabbit Run, simply for the fact that the cheeriness of it would juxtapose so nicely against what I was going to do to this poor little bunny. But how to finish it.

A chance evening in with nothing to watch but 'Top 100 sexiest music videos' was to be my saviour. Never mind thatthe woman co-hosting sounded like she should have been on one of those ads that crop up at about 1:30am. You know the ones I'm talking about, 'Sexy girls in your neighbourhood are just waiting for YOUR call.' Nonetheless, I found myself tapping my toes to a completely over the top pop/hip hop song and voila! I had my music.

The process was a lot of fun for me. More acting than dancing, it was just a bit of silly fun. I could never have predicted just how much the audience at Club Smooch was going to love it. The reaction was overwhelming. I often have people come up to me after a show to say they liked the act, etc. This time I had people copying the bunny moves!

Speaking of Club Smooch, all puns aside, the Halloween event was a hell of a night! I also performed my La Belle Femme en Rouge act which was the complete opposite of Rabbit Pie. It's a 30s jazz era fan dance with an exquisite costume from Curve Couture. You can see it here where Vanessa, our Club Smooch maid has snapped me backstage waiting to go on.

Chrissie (boss lady at Curve Couture) also had a fashion show during Club Smooch. Her fashion shows are never ordinary and although I saw them rehearsing and had a little peek from behind the curtain backstage I didn't get to see the full show until I was going through the footage from the show with Bob on Saturday. Wow! It was very, very sexy.

In fact, on the Halloween night I was onstage no less than 4 times! We all got out on stage for a boogie to one of Trixy Vixens songs Moloko, and I was also part of the Club Smooch Troupe. It reminded me of all the things I miss about theatre. In particular a nice Sunday roast before rehearsals! 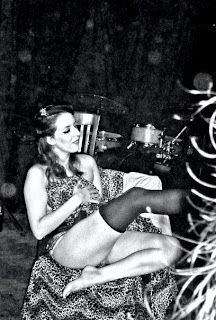 Posted by Burlesque Against Breast Cancer at 07:10