Bacchus By Any Other Name 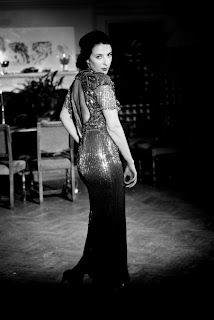 It is currently nearing on 2am as I appear to have out-slept myself. So I thought I'd tell a little tale about this month so far.

Well the first bit of big news is that I've started working on another act. I'm quite focused on environmental awareness and so this new act will be a balloon pop tribute to our Honey Bees. What else could I call it but The Honeypot (Plight of the Honeybee). If there's one thing burlesque allows me, if not demands of me, it is certainly the freedom to come up with the cheesiest names I can. A balloon pop is one of the traditional burlesque acts and as of yet I've not had one because....well, because I HATE popping balloons!

Well actually, I don't hate popping balloons I just hate when they pop unexpectedly. I was the kid that wouldn't join in the balloon popping game at my school friends parties. You know the one where everyone has to hold a balloon between their knees and try to pop everyone elses balloon while keeping yours safe? Creating this should be an interesting process and may possibly see my blood pressure skyrocket.

Next thing for this month was Hula Hooping. I'm currently attempting to collect circus skills like some people collect stamps. Speaking of which does anyone actually collect stamps anymore?

Anyway, as I often say 'I'm proud of my curves' when I really mean to say 'I hate sit-ups and I don't give a damn what you think', I've discovered the perfect antidote to my anti-exercise mentality will definitely be Hula Hooping. If one of those babies isn't in my Christmas stocking this year then I am throwing my toys out of the pram.

I have to say though, that I've been wanting to do a Hula Hooping act ever since I saw a duo at the London Burlesque Festival Newcomers earlier this year. H-O-T. I can't even remember the name of their act but it was a travesty that they didn't win anything.

Finally we have this Friday. I've been planning a trip to Vivienne of Holloway ever since my brothers sent me a gift voucher for my birthday to try on the cutest dress I'd ever seen. I roped Bea Devile into coming along with me (I didn't need to try too hard) as it's always more fun with two. I came away with a dress, and a pair of fabulous high waist denims AND one of their halter tops. If Bea hadn't rushed me out of there to get to the Nikita Sablier sale, I may have maxed my credit card out.

Bea had discovered a wonderful covered arcade near Carnaby St which has no less than 6 vintage stores and Something Hells, the vintage hairdressers of Miss Betty & Mr Ducktail. The inside of the arcade has a courtyard which feel like it's outdoors but is fully covered and currently bedecked in pretty fairy lights. Much nicer than some of the nasty (there's no other word for it) Christmas displays already up all over the place.

Oh but we had run out of time to look at all of the shops so we had already planned our next visit for December as we had tea and cake at Candy Cakes to get our energy back before our respective journeys. Candy Cakes have the most incredible looking muffins. Brightly coloured icing and topped enormous marshmallow and jelly shapes, they really do look the part in their little turquoise giftboxes.

Unfortunately they were a bit sickly sweet for my tastes but very cute looking nonetheless and kept me going for the next few hours of London traffic hell. In fact, I was lucky to arrive at Nick Von Fiction's place with enough time to down a half glass of red wine before we jumped in a cab to the venue.

We had been planning on trying out some vintage style photographs in Die Freche Muse venue for a while. Unfortunately, my issues with the traffic left us limited time but with the time we had Nick worked wonders. He'll try to tell you otherwise but he really is a bit of a clever clogs with his lighting.

I managed one costume change before the doors opened for Die Freche Muse and some of the results of our shoot should be up on the website before long.

Throughout the shoot, one of the other burlesque performers for the evening, Laurie Hagen was waiting downstairs. Laurie has one of those incredibly expressive 1920s faces and as I saw later in the night her act was just gorgeous.

Once the doors had opened, I took my things upstairs to the dressing room where the house cat was on hand to inspect all our things. At one poin,t as Laurie and I were getting ready, he had us in stitches as he crawled under a sheet and was just swiping with one paw at Laurie's feet. Once he realised we were no longer playing, he decided to throw himself at the 30 cm space between us which resulted in us both squealing like little girls and him nearly clearing the bed.

Often at these events a lot of the night is spent upstairs or backstage if you will, chatting with other performers and friends of the promoters. I had the opportunity to chat with Millicent Binks who looks almost exactly like a china doll, so delicate! And briefly met Sumi Sumatra although I unfortunately didn't get to see her act.

I did discover that we had the same pants on however and I wonder if the audience thought there had been a bit of costume sharing going on backstage.

As ever with Die Freche Muse, I didn't get back home until after sun up. The Baron von Sanderson was late to this party though as he'd been filming for Come Dine With Me. I'm dying to know when his episode airs!

You might have noticed the title of this blog, Bacchus by any other name. A tribute really to a man who reminds me ever so much of a cross between Bacchus, or Dionysus in other mythology, and a very naughty little boy. Although I suppose Bacchus was just a very naughty little boy really. Whether he's taking everyone over to the bar for another champagne or swooping a lovely lass up for a dance, he is ever the otherworldly host. So Baron, well done for another wonderful Freche Muse!

Well that's enough writing for tonight. BW is tugging at the sleeve of my dressing gown to come watch a film before bed. Sometimes he reminds me quite a lot of a cat. If you've ever owned one you'll know how much they like to get in between you and the computer screen with a 'What is this strange thing you're giving far too much attention to? Here, let me remedy that' kind of look as they plonk themselves on the keyboard.

Night all...x Bella
Posted by Burlesque Against Breast Cancer at 08:20