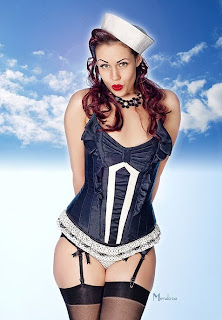 BABC kindly asked me if I would like to write a little something and being one for a challenge, I thought I’d give it a go (those of you that know me know I’m not much of a writer more of a talker…Ahem!), so for all those who don’t know much about me I thought I’d give you a little bit of background on Beulah Bell.

I grew up in north London and danced every since I can remember. I still hear my Ballet teacher Mrs Swan chanting “good toes, naughty toes” in my head every now and again. As I got older, I grew bored of the restrictive dance classes & longed for more freedom to express myself, so at 18 I found myself stepping into Sophisticats one of the more ‘Klassy’ strip clubs in the West End to audition.

My legs were shaking, my heart pounding with a thousand thoughts running through my head as I waited behind the curtain for the DJ to announce my name. As soon as he did though, all those feelings just disappeared and I just ripped back the curtain and I strutted on to the stage, like I’d walked on stage so many times though out my youth but this time it was different, this time I was going to take my clothes off….

The rush of being on stage, the lights beaming into my glitter encrusted eyes for the next 6 minutes and 33 seconds I drifted in to the most beautiful place being carried by Blondie’s Rapture that by the end of my audition, I was blissfully embracing my nakedness & I strutted back stage on the biggest high I have even known. I knew then that I loved the tease!

I know what you’re all thinking Burlesque is different to just stripping. Well... To be honest, it’s not.

By 21, I was working in the club that changed my life, Sunset Strip in Soho London, one of the oldest clubs around. It had the most amazing atmosphere it was like stepping back in time whenever I walked in there, not like any other club I had worked in we only performed on stage where we got tips. It was more like an old burlesque club of the 1950’s than a modern day strip club each girl had their own unique style from gothic to cheese cake, Sunset taught me how to really be myself & set me free. It was then I decided I wanted to get into burlesque, but at that point the revival was pretty small & very hard to get into, so I put it on the back burner for the next 5 years. Those years were lost in a blizzard of glitter and fairies and without a doubt, those fairies shaped the performer I have become.

So at 26, my dancing life was cut short. It was a Monday night at Sunset. I had been at college for the last 8 months studying art & design, my life was pretty hectic I was on the go 24/7. This night though, I didn’t feel right at all my stomach was in knots & I had to fight back my tears of pain on stage, usually I could mask anything on stage as I would be taken to that beautiful place & everything would just slip away and it would just be me and the music but not tonight. And unlike me, I cut my show early and staggered up the stairs with tears streaming down my cheeks. I was taken to hospital where I stayed for a month after major surgery, following a small bowel obstruction.

Six stone, a nine inch scar, no job, no money & unable to finish my college course, I fell down a pit of darkness. I had never been anywhere so bleak so lonely. I had no dreams, no inspiration, no creativity, then Amber Rosia & I founded Ragdoll Rebels & my life turned round. We decided to put on our own Burlesque/Polesque (Burlesque on a Pole) club nights & launched in July 2009 at The Embassy Club in Mayfair.

Burlesque really saved my soul. We performed & promoted our nights all over London and with each performance, my confidence slowly returned but then a year later, I sadly stopped working on Project Ragdoll (the nature of promoting was too stressful & as a performer I was not cut out to handle that at all) and at the same time something very odd happened. A magician found me & I landed a magicians assistants role (something I had dreamed about since I was very small) for the legend Simon Drake at his House of Magic. All I needed now was some stability, some security for the first time in my life I wanted a…..’PROPER JOB’.

So unlike most Burly acts who come from a life of day jobs & offices & wanting to break free of that I did the reverse. I finally got offered a receptionist position so now performing is for fun. Don’t get me wrong, if I got offer a residency in Vegas I would be off in a New York minute but I’m realistic, I’m not guna be the next Dita & to be really honest, I like the way I have it. Too much glitter can go to a girls head & those days are over.

Well, lots of very exciting things have been happening in the Land of Miss Beulah Bell. The most recent was coming runner up in Bizarre Magazine & having an amazing shoot with seven smokin’ hot chicks, which is featured in the October issue! The day was fantastic. Eight half naked girls running about a beautifully run down Edwardian house in Shoreditch, whilst being snapped by a fantastic photographer, Joe Plimmer.

On the Burlesque front, I have been doing quite a few gigs at Volupte for their Circus Nights with Miss Amber Rosia and we have been performing our ‘Lion Tamer’ act which has been great fun!

I had a spectacular night down in Southampton once for the Uni Ball at the Guild Hall alongside the wonderful Tia Brodie (Britons Got Talent) & also at Roxy Twirls’ ‘On a Night Like This’ (a Kylie tribute night) where I got to perform my first ever act I came up with, the LoCo Motion & the Classic 2 Hearts!

I was also down in Bournemouth for Cherry Pop’s Butterfly Ball which was absolutely fantastic & performed at Café De Paris for the TVX Birthday bash. Amber Rosia, Angelita Alahambra & I are the resident performers at The Cheeky Cabaret at The Live Room, in good old Palmers Green returning on Tuesday 5th October (only £3 entry) with an array of fantastic acts including my dear friend Rio Wild. Watch out for shameless FB promotion!

Beulah Bell has performed for Burlesque Against Breast Cancer and will be performing next at the House of Magic on the 24th September. Tickets are available: http://www.houseofmagic.co.uk/public.html

Posted by Burlesque Against Breast Cancer at 05:12