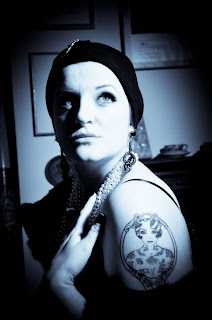 God, I realised I had finished my blog by getting ready for Teasy Pleasy, promising you photos and post about it then clean forgot. Oops…

Not like there is anyone to tell me off.

So, Teasy Pleasy was a good night all round. A few sound hiccups at the start didn’t distract too much from the night. Domino Burlesk was every bit as delightful as I remembered her to be as was Glory Pearl, Raspberry Ripples and the other performers. One again Miss Anticipation bought members of the audience to their feet with cheers for her act. God that girl is strong. She did press-ups, flexes and all sorts! Adorable! The only downside for the night was that one of the stall holders didn’t have Bordello leopard print shoes in my size! Gutted! By the way (HINT HINT), to anyone who wants to buy me something to make me smile. In fact any of their shoes would be good. I have been a good girl all year…sort of.

I spent the rest of the evening dancing with mates to the Whip Crackin Daddies…rather dishy trio, even if I do say so. The whole place danced along to them and they certainly have stage presence. The double bass player had girls swooning over him though admittedly, Jim Jeffries was the pinup of the group. His pretty boy looks grabbed all the girls’ attention. A fair few ladies were overheard gushing over him….The drummer got the girls squealing when he jumped into the audience to play. I safely retreated to the bar to watch the carnage of women and dancing commence. Awesome times to say the least. A late night and a stagger home with my best mate Big S that got me home so late it was disgraceful. Big S you have alot to answer for!! Just like old times then.

The next day was spent nursing a hangover and being dragged reluctantly out of my bed at Dixie Doll’s house to head off to shop, I crashed and burned with Tempest-Rose on the grass in the sun….

I even managed to pick up a new jacket for me to take to Paris for my show out there in October…oh how I love it. It’s green wool with leopard print cuffs and collar. Made by the delicious brand Aquacustum…spolit? me? yes! I did prat around in a few vintage shops as well. I managed to find a real treasure trove of a shop. When I arrived a new shipment of vintage French lingerie had just arrived. WOW, the whole lot were in perfect condition and some unworn.

If you are ever near Bournemouth/Boscombe/Southbourne I suggest you visit Clobber. It’s a great shop and I am going back to mooch some more as soon as I get back that way. I have my eye on some 40s dresses and some cowboy boots. The rest of the week revolved around rehearsals ready for the weekend show at The British Science Festival and a radio interview (more to be disclosed soon). I have to say a pretty subdued week all in all…though a lot spent listening to the Whip Crackin Daddies album Paul gave me. ‘Fire’ is my favourite though oddly reminds me of the old Rawhide theme song…oops did I say that?! :p

So last night saw me performing at the British Science Festival and I have to say, I had a brilliant time. I was put up in a very nice hotel with flowers delivered and wine (nice!!!) and was treated impeccably. The show went really well…my Gorilla act certainly raised a few laughs and Professor No No had them singing and dancing with me. Fabulous, so a special shout out to all at Aston University students who attended and to Mel Spencer for organising it for me to be there. MWAH! I would like to thank the free styling rapper who made a rap about me but I never got his name other than he was Canadian (from Vancouver) and loved science.

A rather surreal moment was dancing at the end of the night only to realise I was surrounded by people in white lab coat, it felt all too horror movie waiting to happen for me so moonwalked (yes moonwalked! *SHAME*) out of the circle and ran for cover at the bar.

Pretty much spending much of today (Sunday) catching up and rehearsing for my next shows. I have glitter all over me but then that’s nothing new. Off to listen to some Big T Tyler…I use some of his music in my acts. Great catchy beats I found. Right, ciao ciao!

Khandie Khisses has performed for BABC. More can be found at: www.khandiekhisses.com

Posted by Burlesque Against Breast Cancer at 05:26