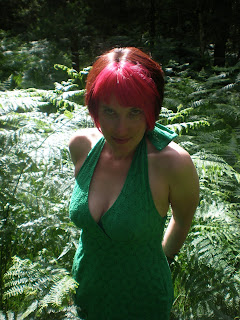 September has been a busy month for the Swoons and the Swoon bus.

Poor old Swoon bus, we had to fork out seven hundred quid on it last month at the MOT but it’s holding up well. When it’s not ploughing into ‘fields of barley’ or running over badgers, the Swoon bus enjoys travelling hundreds of miles taking me to various wonderful burlesque gigs across the country. First stop this month was Darkteaser’s Dark Side at The Victoria Biker’s Pub Coalville Leicestershire.

This was a challenging gig for me. I haven’t performed for six weeks which is the longest break I’ve had since starting burlesque nearly a year and a half ago. August was a quiet month and I was away on holiday, but I was also battling with a massive bout of depression and most of August is a complete blur. By September, I was ready and excited to leap back into back the saddle and looking forward to this show. It was also especially exciting because we didn’t know exactly who was going to be performing until we all turned up at the venue!

As soon as I got out of the car at the pub, I spotted the lovely Nicole A Lure, burlesque performer and Hourglass photographer. Absolutely lovely to see her again. We’d performed together at The Slippery Belle Leeds a couple of months before but we hoped this time we might catch each others acts! Also performing were comedian Al Grant from Derby, Angel LaVey who I hadn’t yet had the chance to see perform and Darkteaser herself. The compere for the evening was the fantastic Tobi James.

I had a lovely time performing, the crowd were loud (always good) and friendly. I scraped up my knees beautifully crawling across the stage with my rubber chicken planted firmly between my teeth during ‘Valhalla’ and my legs still held up for the high kicks during ‘Trumpet Player’. It was great to catch some of the performances. Al was delightfully crude, Nicole’s singing was amazing as always and I loved Darkteasers ‘I’ve got a lovely bunch of coconuts’ fan dance! Robin Lowe and James Thorpe took some amazing photos of the evening and Tobi held the whole show together beautifully.

Two days later, it was time to embark on our journey to The Glitter Room at The Black Sheep Bar Croydon. Mr Swoon installed the new Sat Nav; Croydon’s one way system was not going to beat us. If we can navigate Soho we can navigate Croydon. Nuvi (you’ve got to give your Sat Nav a name) was true to her word and we arrived after about 4hrs and parked easily in a side street around the corner from the venue for two quid – excellent.
It was a pleasure to perform at The Glitter Room. DJ Suave runs a tight ship and there was a great atmosphere backstage. Miss Doxy Moron did a great job taking care of all the performers and there was even a buffet provided too! I managed to catch quite a few performances and they were all fantastic. Compere Tempest Rose had me in stitches with her Camden Council routine and I also loved Daisy and Doris’s Cary Grant act which was hilarious.

Backstage, I caught up with Audacity Chutzpah and Lolo Love who I’d last met at the Valentine’s Varie Tease back in February, Ruby Fortune who I’d had the pleasure of performing with at BABC at The Book Club Boutique in July and Bea DeVile who I saw last when we were both shivering with fear waiting to perform at the LBF back in April.
After the show it was back to the trusty Swoon bus for the long haul back to Leeds. Nuvi who had been so reliable on the outward journey this time decided to take us on a magical mystery tour on the way home. I don’t know a great deal about ‘driving’, although you’ll be pleased to hear I do hold a valid driver’s licence (Fact, fans!) but Mr. Swoon explained something about one way systems and had faith as we drove around and around London village.

Eventually she directed us back to the trusty A1 and we even managed to find a twenty four hour service station open on a Sunday night. I do love a brightly lit service station after midnight. We rolled in back home at around 3.30am, our mood rather dampened after running over a badger that had darted out at us on a country lane – horrible. We were up bright and early at 8am for the kids first day back at school and my youngest Alex’s first ever school day. He looked very smart and very little in his school trousers that kept falling down. He settled in great and at 9.05am, I settled in great back under my duvet with no problem at all.

The following Saturday, we were off to The Candy Shack Burlesque at Oliver’s Bar Aston under Lyne. I first performed at Candy Shack in July of last year at their first ever burlesque night so it was great to go back and see everyone again. Joan and Jas are passionate about their night and even provided the performers with a V.I.P area to watch the show. Resident performers, Suzie Sequin and Dani California were fabulous as ever, I got to meet Lucy Lippstikk who I’ve not seen perform before and had the pleasure of driving home fellow Leeds burlesquer Nelly Plum home. She brought chocolate éclairs for the journey and we ate them.

All in all a busy September so far. Back in October with another round up.